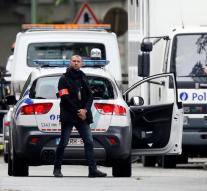 brussels - The Belgian police has arrested another twelve terror suspects in the night from Friday to Saturday. The majority of those arrested in and around Brussels. The police did at forty places search, Flemish broadcaster VRT reported.

The police arrested some of the suspects, according to the Walloon broadcaster RTBF for a few days in the holes. They would have been part of a terrorist cell which was preparing an attack.

The arrests would have nothing to do with the threat of an attack on four leaders of the Belgian government.