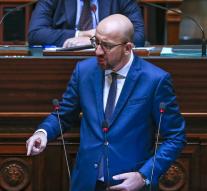 brussels - Belgium makes 400 million available for the fight against terrorism. Syriëstrijders returning trapped in principle. That made Prime Minister Charles Michel on Thursday in the Belgian parliament.

The prime minister presented a total of eighteen measures. People who are known to the intelligence community as a threat should receive an electronic ankle bracelet. Furthermore, it should be possible to carry out 24 hours a day raids extended by a terror suspicion and the investigative powers.

For the Brussels municipality of Sint-Jans-Molenbeek, where a number of suspects in the attacks came from Paris, an action plan, covering both preventive and repressive measures.