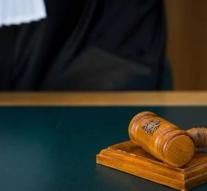 antwerp - In Belgium, the first person convicted of a terrorist assassination in Syria. The court in Antwerp explained the 24-year-old Hakim E. of Vilvoorde 28 years in prison on Monday.

Foreign rebel fighters in the Syrian Civil War five others were acquitted. They might have played a role in a beheading video, but this is according to the judges insufficient evidence. Justice had demanded from all six thirty years.

E. was the only defendant who was present at the trial. The court considers it proven that the former Sharia4Belgium member beginning in 2013 in Syria, someone shot in the head and tried to film.

The main evidence is a tapped telephone conversation with his then girlfriend on the execution of a Shiite. Who was the victim is unknown. E. withdrew a previously recorded confession. He came back to Belgium in 2014, after he had suffered a brain injury grenade.