Home / World / Belgian suspect confesses: 'I made voyeuristic videos and posted on forum' 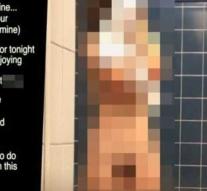 ghent - Mike D.B., the Belgian suspect who was arrested yesterday in the Ghent case around the voyeuristic films, would have known. VTM and Het Laatste Nieuws report this.

He turned to confessions during his first interrogation. D. B. admitted to filming women in a sports hall at the Hogeschool Gent. He also admitted that he posted them on the forum under the username 'dgreedb'.