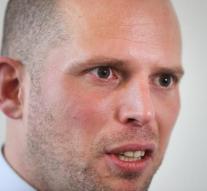 Upon arrival Francken was stopped by dozens of demonstrators and was thrown to the politician with shoes and beverage, reported Belgian media.

Francken is under fire for refusing to grant a visa to a Syrian family, even though the court determined that the Belgian Government that it should do. The family is befriended by a Belgian family that wants to guarantee the Syrians, and wants to capture them yourself.

The court threatened with a penalty of 4,000 euros per day. The politician fears a 'dangerous precedent' and has appealed.

Within the debate Francken defended his decision to issue a visa for the Syrian family. That would, according to him 'a bridge too far. 'The Minister is afraid that there would be more Syrian refugees in this way try to come to Belgium.