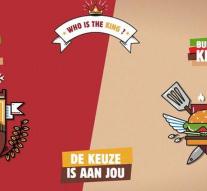 brussels - The Belgian royal house is not pleased with a new advertisement of Burger King Burger Burger. There they ask who is the best king: Burger King or King Filip I.

Burger King opened its first branch in Belgium this month, and it is therefore time for the Belgians to choose who their real king is once the fastest food chain. 'Who is the King?' Is the slogan of the ad.

If anyone tries to vote on a special website on Filip, it will be difficult: 'Are you sure you want to swear to King Philip? He is not the one who will bake fries, 'you will read when you click on the real monarch. Whoever stays on hold gets the following text: 'Get up at 23:00 unannounced to see what's happening... 'Only after another question is the vote counted.

A spokesman for the royal house speaks in Sudpresse of a 'tasteless' comparison between a true king and the king of the burgers. 'No permission was requested to use the king's image, and in this particular case, nothing was even asked for us. 'According to the newspaper, there has already been contact between the fast food chain and the royal house.