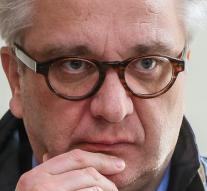 brussels - The Belgian Prince Laurent, according to Belgian media ' on strike '. He is coming next Sunday not "accept other assignments from the Palace. " To the annual King's, and refuses according to the Standard also

The reason for the princely strike would be the commotion that arose two weeks ago about some declarations by Laurent. The prince sat include receipts from the grocery store and an account of his skiing holiday at his expense report. Several politicians sounded the alarm because they said they were not able to. A majority in parliament feels he must repay the money.

A spokesman for the Palace Laurent and his wife Claire are not boycotted by King Philip and they just invited to King's. " However, the prince and princess have indicated that they do not come, without giving a reason. "