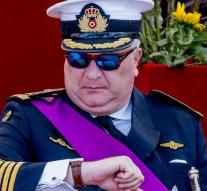 - Formerly Belgian Prime Minister Charles Michel has not yet made any statements about a possible sanction for Prince Laurent. That is what Belga reports. The younger brother of King Filip visited the Chinese Embassy last summer without permission from the government.

Laurent is assaulting part of his annual allowance, his dotation, after taking on his own behalf several times for which he should have asked permission. The Belgian Council of Ministers spoke about this issue at the beginning of this month, and soon the Council of Ministers has discussed it again. In preparation for this, Prime Minister Charles Michel spoke to Laurent's lawyer on Monday.

Michel also wanted to speak to Laurent himself, but that conversation has not yet taken place. The prince reported sick one and a half weeks ago and then expressed the preference for a conversation between the Prime Minister and his lawyer.

On Tuesday, Michel van Kamerlid asked Peter Buysrogge (N-VA) whether there had already been a conversation and what sanction the government had in mind. Michel replied that he spoke Laurent's lawyer on Monday and that the Council of Ministers 'bends' over again. The Prime Minister remained 'from a legal point of view' very reluctant, alone to respect the rights of the defense. He called it too early to make statements about a possible sanction.