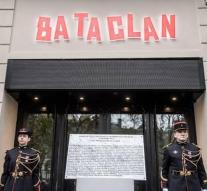 brussels - A 30-year-old Belgian was detained in Brussels on Friday for his 'leading role' at the attacks in Paris on November 13, 2015. Yassine A. is suspected of 'terrorist murders' and 'participating in the activities of a terrorist group as leader' Reports the Belgian Public Prosecution Service on Friday. At the attacks, 130 killed.

The man was already in jail because of another terrorist case. According to the OM, he was preparing a new attack in Belgium. In addition, according to the newspaper De Standaard, he had a key of the flat where the belt girders were made for the attacks in Paris.

The born in Brussels A. is the brother of Oussama A., the suspected brain behind the attacks in Brussels on March 22, 2016. He is also the cousin of Ibrahim's brothers and Khalid El Bakraoui, the suicide bombers of those attacks at Zaventem Airport and Maalbeek Metro Station.