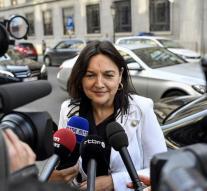 brussels - The Belgian Minister for Energy and Environment, Marie Christine Marghem, has 'absolutely no intention of revising the climate targets of Belgium by 2030.' This is why she refuses to report in Belgian newspapers that she wants to reduce the climate ambition of her country and is about it Negotiate with the EU.

Premier Charles Michel had already said in a reply that Marghem's alleged statements do not reflect government's position and that Belgium will do its utmost to achieve its climate goals. In a press release, Marghem now says that she sees a 'leading role' for Belgium in combating climate warming. That will 'require a serious commitment from all over the country'.

Belgium has to reduce emissions of greenhouse gases by 35 percent by 20 percent. Marghem's spokesman told the newspapers that it was too much. 'The European Commission takes too little account of the fact that we are a transit country with a lot of foreign freight traffic and with many outdated buildings. '

After a wave of criticism, Marghem now denies that she wants to scratch the ambition. Among others, Secretary of State Sharon Dijksma (Environment) has already moved to Marghem. 'What a disappointing signal. A no go for NL, 'she tweeted earlier Tuesday.

Greenpeace called the words of Marghem 'the shame over' and claimed that she deserves the title 'Donald Trump of Belgium'. Because the climate targets are set at European level, a lower target for Belgium would mean that other EU Member States should make more efforts. Greenpeace fears that the negotiations between the EU and the Member States will turn out 'on a kind of co-trade, in which each country is hiding behind apologies. '