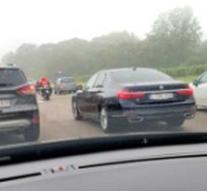 brussels - You would expect it in Zimbabwe sooner, but also with our southern neighbors it happens. A Belgian minister has several times with roaring sirens in escort transport through the country causing enormous traffic jams.

The Belgians on the E314 and E40 motorway are annoyed with green and yellow at the police caravan of Minister Steven Vandeput, who vies along while they are being pushed aside. That would happen three times a week, writes Het Nieuwsblad.

Commuting from Limburg to Brussels is no fun anyway. The traffic jams begin forty kilometers before the capital. And the minister has no time for that on the way to the office. The common people must stand aside.

'The most annoying thing is the escort from Minister Vandeput,' says a commuter who took a picture of the scene and sent it to Het Nieuwsblad. 'Nowadays we are all pushed aside by Military Police (MP) on the motorbike three times a week, which Vandeput pilots through the traffic jam in his big BMW. From him in Hasselt to his ministry in Brussels. '

'Annoying,' is the majority of the commuters. 'And there is almost behind. I always wonder: who has declared us war again? 'Jokes a policeman, who is in the same queue and has been forced on the bad luck several times. 'I like to stand aside for an ambulance or colleagues in the combi. But this? It is annoying. '

'The MPs push us aside with heavy arm gestures. The minister just behind. On the E314 and on the E40. There he is going to drive between the third and fourth track section. '

A spokeswoman for the minister says to the newspaper that 'Such an escort is one of the advantages that a Minister of Defense enjoys'. It is denied that he would do this often.

Also the trade union representing the motor agents is not happy. 'Hopefully he will moderate his escorts. Because those MPs still have a lot of other work. '