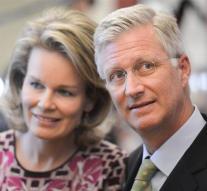 brussels - The Belgian king Philippe and his wife Mathilde bring back an official state visit to the Netherlands this year. They do so at the invitation of King Willem-Alexander.

The Belgian royal couple is from 28 to 30 November in the Netherlands, as both royal report Tuesday.,, The state visit confirms the close and multifaceted neighbor relationship and stressed the historical ties and shared values, '' says the Government Information Service.

Belgium after Germany's main trading partner of the Netherlands. RVD further mentions the political, cultural and academic cooperation between Belgium and the Netherlands.


The 56-year-old Filip took the throne in July 2013 from his father Albert. The first state visit by King Philippe and Queen Mathilde aflegden nearly three years ago in the Netherlands.