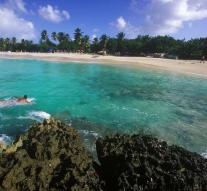 - The 21-year-old Wendy Montulet from Huy (Liège) was found dead Sunday in the Caribbean in St. Maarten.

Montulet Saturday morning left her hotel to go jogging around, but she did not return.

Het Laatste Nieuws reports that the 21-year-old woman that day and her family would fly back to Belgium. When she did not return, the police issued a search notice. The woman's body was found a day later in the sea.


The cause of death is still under investigation.