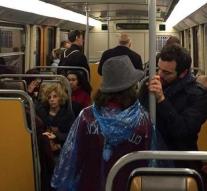 - In Belgium, it is shocked to respond to the plans of the Muslim party 'Islam', which calls for the separation of men and women in public transport. This is to protect women from palsy men. The ultimate goal of the party, a hundred percent Islamic state, is also controversial.

In the upcoming municipal elections, the party wants to participate in at least 28 municipalities. The most important goal is a completely Islamic state. 'With the introduction of Sharia we mean the way of the Prophet and the Koran, not that we will cut off our hands or oblige women to wear a headscarf,' explains Anderlecht city councilor Redouane Ahrouch to Het Belang van Limburg.

The Belgian Constitution wants to keep the party. 'We are concerned with the values ​​of our religion. '

The separation of men and women from public transport is a concrete proposal of Islam. The measure must protect women, Ahrouch argues. 'I just get a lot of complaints from women during peak hours when everyone is packed up on the bus. Men take advantage of this to become paws. That is the only reason why that proposal is in our program. '

The party has been active since 2012 in the municipality of Molenbeek and in Anderlecht. The two candidates who were eligible in Brussels ultimately did not reach the city council.