Home / World / Belgian IS member sentenced to death in Iraq 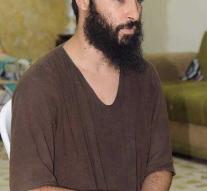 The Iraqi court called the 30-year-old Jadaoun 'one of the most wanted foreign fighters who fought for the terrorist organization in Syria and Iraq'. The authorities arrested him in Mosul, formerly the actual Iraqi capital of IS.

The Verviers man is the first Syria fighter from Belgium to receive the death penalty abroad, reports Belgian media. Jadaoun can still appeal under the VRT.

IS underwent approximately one third of Iraq in 2014. Meanwhile, there is little left of the Caliphate of the extremists. The Iraqi Prime Minister Haider al-Abadi said late last year that his country was completely freed from the terrorist organization.

Special courts in Northern Iraq tried people suspected of involvement in the terror of IS. This usually leads to the imposition of the death penalty or life imprisonment in lightning-fast 'processes'.