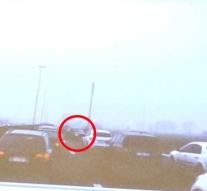 brussels - In the Netherlands, some Amsterdam and Rotterdam streets filled with honking Turks after Erdogan's victory, while the wedding stakes often attracted a lot of attention- and honking them. In Belgium they make short work of it.

Last year in February a wedding procession took place on the highway, the E17 in Lokeren. Fourteen people have now been sentenced by the court in Dendermonde. Damage: fines up to 4.000 euro (!) And driving bans from three to five years.

The cars stopped in the middle of the highway and blocked traffic, all honking. 'This creates a lot of aggression and even racism with other drivers, you have to understand that this can not be the intention', judge Peter D'hondt said earlier. 'There are already enough racists, actually I try to protect you. '

The judge wants to make a statement. 'The facts are completely unacceptable. It is traffic-safe behavior and it arouses aggression and aversion, 'says D'Hondt. 'It has been done with the wedding stalls, at least in our arrondissement. '

In Rotterdam, seventy Turkish Erdogan supporters got a traffic penalty last Sunday, after dozens of fans took to the streets in major cities and blocked traffic.

'I was full of amazement looking at it. There was a lot of police. Nuisance. The entire traffic was disrupted, 'publicist Yesim Candan told De Telegraaf. 'That is not necessary, I think. '