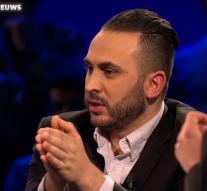 mechelen - The Belgian jihad connoisseur Montasser AlDe'emeh Thursday sentenced to a suspended prison sentence of six months and a fine of 600 euros. The court in Mechelen declared him guilty of issuing a false statement for a jihad suspect. Justice had demanded a year in jail.

AlDe'emeh was a PhD student at Radboud University in Nijmegen when he was arrested in January at his home in the Brussels municipality of Sint-Jans-Molenbeek. Authorities questioned the certificate stating that jihad suspect Jawad O. had attended a deradicaliseringscursus an association presiding AlDe'emeh. According to the Court is indeed tampered with.

The judges put a lawyer and an imam (the brother of O.) the same punishment, Belgian media report. A fourth defendant was acquitted.