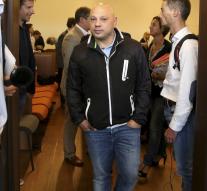 brussels - Two suspects in the murder of the Belgian criminal Silvio Aquino are Friday through France extradited to Belgium. The two were arrested over two weeks ago in a hotel in the southern French city of Nice. They are transferred to a prison in Belgium.

The suspects, according to the newspaper Het Laatste Nieuws extradited under heavy security. They are transported by government aircraft, because transport by car would be too risky. The authorities are apprehensive about reprisals by the family of Aquino.

Aquinas (41) was in August 27 with his wife by two cars with four or five men clamp driven in Opglabbeek the Belgian Limburg. The woman was beaten and the man was shot. Later, it was found in the Netherlands on the hard shoulder of the A73 the body of one of the possible shooters.

There are two other fixed because of possible involvement in the murder. It is about two men from Eastern Europe who were arrested in Cologne. They resist extradition.

According to Belgian media Aquino was assassinated by members of the Bosnian crime clan Hamidovic. That clan is mainly concerned with violent robberies, drug trafficking and extortion. It is suspected that the men will say nothing about the murder because they will be killed by other clan members.