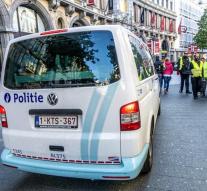 - An eighteen year old Belgian in Liege caught in the act when he broke into a police station.

That is justice in the Belgian city reported Saturday. The burglar had targeted the uniforms of the officers. The justice he had already put in a pocket when he was caught.

The burglary was Saturday around 05. 00 pm. According to justice the man was drunk. He is a well-known attorney.