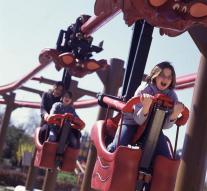 - People who want to visit the theme park Plopsaland De Panne in Belgium, have a chance that the park is closed. The park should be closed in accordance with the law because the environmental permit has expired. One complaint of the residents can therefore be fatal.

Insofar as it may not come, says CEO Steve Van den Kerkhof of Plopsaland to Belgian media, though he also is not assured. Plopsaland had officially Monday, July 18 must have a new license.

The park does everything to satisfy local residents, such as placing additional trash cans against litter and placing signs referring to parking spaces.


Two and a half years ago, the park hired a company in West Flanders to arrange a new license. The company was a year ago, completing an environmental impact report, but this did not happen, says the CEO. The judge must find out Van den Kerkhof whether the company has failed.

The Flemish government will prepare an official report stating that the authorization fails at Plopsaland. In the worst case, the Environmental Inspectorate may then undertake to close the park. Especially when a complaint indicates threat to the environment.