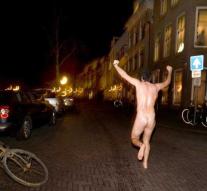 liege - More and more people are being converted, but voluntary penis reduction is still a fairly new phenomenon.

For the first time, a Belgian had his genitals made a size smaller, reports Nieuwsblad. The 48-year-old man had an average penis length of eleven centimeters at rest and sixteen centimeters in 'working position'. Yet he was not satisfied with it. 'For ten years he was looking for someone who wanted to carry out the operation', says a surgeon. ' We invented the technique for him. Because nowhere was described how this could best be done with someone with a normal penis. '