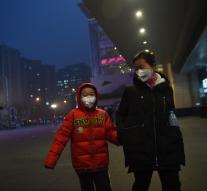 - Beijing will remain to suffer from heavy smog. The current code red which was decreed by the government, runs Thursday to finish at 12.00. Meteorologists and environmental experts on Wednesday warned of more of the same. From Saturday the metropolis is again plagued by heavy pollution, they predict.

The current smog reached a nadir on Wednesday, reported the newspaper the South China Morning Post. The smog is characterized by high humidity, wet snow and hardly any wind. The government has taken various measures. Thus, schools are closed, restricted traffic and construction sites in the capital until further notice close.

The Beijing metropolis has around 20 million inhabitants and is after Shanghai, the largest city in the country.