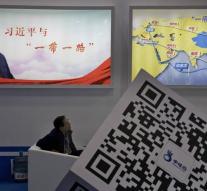 peking - After a sixteen-day train journey in Chengdu Central China, a freight train arrives with 26 tons of pork from the Netherlands. It seems a slow ride, but Xinhua said on Saturday that the train is forty days faster than a freighter. The plane is also not a serious option on the route. The train from or to 'The main logistics center of the Netherlands' is more than 1000 kilograms of freight over 1000 euros cheaper than a freight plane.

Xinhua is launching a relatively new train link between Chengdu and Tilburg on Saturday, because Sunday's Beijing launches a two-day summit on China's ambitious Chinese initiative 'Belt and Road', known as the 'New Silk Route'. The summit brings together about thirty presidents and government leaders. Dozens of countries are shifting with other government officials. Xi's China's fervent desire to open trade routes through investment and literally cut them out, raises interest in the estimated 60 countries that hope to benefit.

Xi has been vigilant since 2013 for a massive China-driven boost in the economic development of countries in Asia, Europe and Africa. For the policy, hundreds of billions of euros are set aside. Much of that Chinese money is destined for huge infrastructure projects abroad. Chinese media speak of a gift to the world.

The New Side Route refers to the trade route between Europe, the Middle East and China, which was used from the classical to the Middle Ages. The new routes that the Chinese leadership sees are moving to and from countries where almost two thirds of the world's population lives. Striking is that the initiators are far from political issues. Everyone is welcome to join China and looks at what can be done on commercial roads.

The fact that the ambitions here and there are difficult to carry out in political circumstances showed Saturday an attack in Pakistan. In the ethnically strained southwest, ten workers were killed working on the connections with Gwandar, the port that China is building for the 'silk roads'.