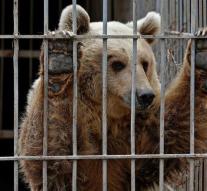 mosul - The only two surviving animals have been rescued from the zoo of Mosul from the city devastated by war in Iraq.

Simba the lion and the bear Lula lived under terrible conditions in the zoo abandoned. They were still in their home cages, their coat beneath the dust and excrement.

Monday came to rescue the animals. Fundraising Four Paws International flew the animals to a reception center in Jordan.

The Montazah al-Morour zoo was destroyed earlier this year during fighting around the city. Most animals died of starvation.

Simba and Lula were the only two survivors. According to Four Paws they suffer from several diseases due to malnutrition and neglect. Their teeth are rotten and the bear had pneumonia.

Veterinarian Amir Khalil was doing a month to arrange the proper paperwork for the animals. A first attempt with a truck failed when they were stopped at a checkpoint. The truck atond nine days silent longest road because there are more papers and licenses needed to be regulated. At that time developed the already sick Simba also breathing problems, the BBC reports.

Last Monday, the animals were finally loaded to Jordan on a plane. 'This is the beginning of a new life for these animals,' said Dr. Khalil told AFP. 'From now on, they have to be no longer part of this war. '