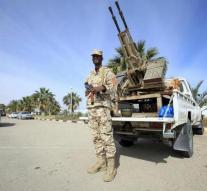 tripoli - Five people, including one child, were killed on Tuesday in the Libyan capital of Tripoli by a grenade that hit the beach. Certainly eighteen people were injured by the impasse near the Mitiga airport.

'The victims are the result of collisions between security forces and gangsters who shed a grenade,' said Deputy Minister of the Interior, Abdulsalam Ashour, of the UN-supported government.

The battles continued on Wednesdays, which suspended the flights on Mitiga.

Tripoli is a patchwork of armed groups, some of which control the airport and the surrounding area. They also succeed in fighting smuggling practices or fighting local disputes.

The beach is on the other side of the coastal road along the airport in central Tripoli. It is popular with families looking for a cool summer evening.