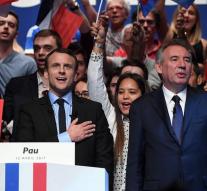 paris - The new French president Emmanuel Macron and his center-right ally François Bayrou have resolved disagreement over candidates for the forthcoming parliamentary elections in June. That's what Bayrou said on Friday night.

Macrons movement Republic on the way! (REM) was interviewed by Bayrou's party MoDem all day to resolve the dissatisfaction. Bayrou complained that his party was underrepresented on the candidate list of 428 people announced on Thursday. There are only 35 members of his MoDem party, while having agreed with Macron 120.

'I think we've made progress and have reached a solid and balanced agreement,' Bayrou said Friday. According to the politician, the agreement must be elaborated on details.