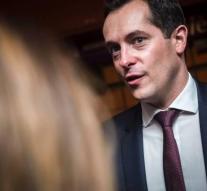 strasbourg - Nicolas Bay (Front National) takes over the seat of Marine Le Pen as co-chair of the European Union of Nations and Freedom Group (ENF). The PVV is also in that group. Marcel de Graaff (PVV) remains the other chairman.

Since 2014, the 39-year-old Bay has been Secretary General of the Pop National Front National and received a broad majority in Strasbourg. Le Pen has been elected in the French Assembly Nationale and is therefore no longer in the European Parliament.

Parties such as the Flemish Importance, the German AFD, the Five-Star Movement and Lega Nord from Italy and the Austrian Liberation Party are also part of the EFN Group, which has a total of 40 members.