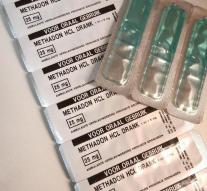 - Bavaria will evaluate the policy for the provision of methadone to addicted prisoners and adjust where necessary. The German state thus responds to a ruling by the European Court of Human Rights in Strasbourg. That finds the current treatment 'inhumane'.

The authorities should consider switching to the health of prisoners and independent experts before.

The complaint was filed by a man born in 1955, which was stuck in the penitentiary of Kaisheim and since his youth was dependent on heroin. He was also HIV-positive and infected with hepatitis C. This seasoned addict was sentenced in 2009 to six years in prison for drug trafficking. He was transferred to a clinic for 'cold turkey' to kick the habit but had since he secretly took methadone, back to jail. There he received his familiar stuff 'no longer required.


Germany set the prison administrations themselves whether they offer addict methadone cons. This has led to a great difference in the various states.