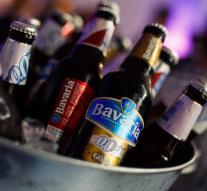 - Bavaria can not claim exclusive rights to his famous slogan 'There. Now first'.

That the court in The Hague Tuesday determined in a lawsuit between the brewer and Internet company Yourhosting. Earlier, the court had Bavaria or in the equivalent.

Bavaria had gone to court because Yourhosting in a radio commercial slogan 'So. Now first to the cloud' used. That seemed according to the brewer too much on their own slogan 'So.