Home / World / Battle for Libyan city of Sirte rages on 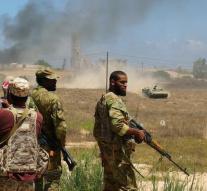 - Libyan government forces on Thursday in the coastal city of Sirte again embroiled in fierce fighting with terrorist group Islamic State. A day earlier conquered the army the former headquarters of IS in the city after weeks of fierce battle.

Sirte was the main stronghold of IS in Libya. Since May, government troops managed to reduce the extremists, but parts of the city are still in the hands of IS. USA perform since August 1 air strikes on IS in Sirte.

The government forces put Thursday's attack on a hotel and several houses near the port of Sirte. The offensive was difficult in recent weeks. In every new street they entered the government troops were afraid of snipers, booby traps and landmines.