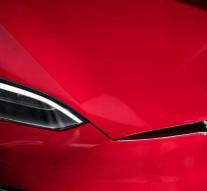 ghent - The theft of an expensive electric car in the vicinity of the Belgian Ghent failed because the battery of the vehicle was running out prematurely during the flight. The thief was forced to leave the Tesla stolen in Sint-Martens-Latem more than fifty kilometers away, in Wemmel near Brussels.

The vehicle was not fully charged and the range was limited. The Tesla was found undamaged by the police. But of the thief, or thieves, no trace.

The car was captured after a window of a villa in Sint-Martens-Latem was taken by the burglar (s). Inside were the car keys that made it a piece of cake to drive away with the Tesla. But the fun did not last longer than about fifty kilometers. Then the battery stopped.

The police is investigating the case.