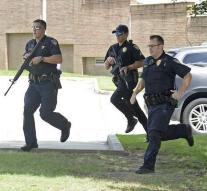 - In the US city of Baton Rouge on Sunday shot dead near police headquarters three policemen and wounded several others. They were ambushed and came under fire after a report of a shooting.

The suspected gunman was shot dead in a gunfight. Police searched for a while for possible accomplices, but concluded that he had probably acted alone. The identity and the man's motive was not yet known.

In Baton Rouge, capital of Louisiana, has recently been a black CD seller, Alton Sterling, shot by two white police officers on the ground during a struggle. Bystanders took pictures of the incident and distributed via social media, which led to great anger.