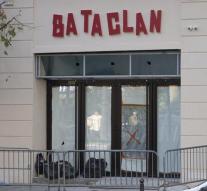 - Almost a year the renovated façade of the Bataclan concert hall unveiled after the terrorist attacks in Paris. The reopening of the venue is on 16 November. British singer Pete Doherty then occurs.

Supporters of the terrorist group Islamic State were committing attacks on several places in Paris last year on 13 November. In addition, 130 people died. In just the Bataclan were 89 deaths during a concert by the American band Eagles Of Death Metal.

The Paris authorities to the attacks on November 13 to commemorate this year soberly.