Home / World / Barrow was sworn in as president Gambia 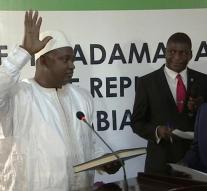 dakar - The winner of the Gambian elections Thursday in the embassy of his country in Senegal sworn in as president. Adama Barrow had to flee to the neighboring country since incumbent President Yahya Jammeh refuses to resign.

Jammeh lost the presidential election in December, but would not abandon the field to be in power after having been 22 years. He acknowledged his first electoral defeat, but changed his mind later. Therefore Barrow explained by the Senegalese state television off the oath of office in Dakar.

Other West African countries have chosen the side of Barrow and threaten to intervene with military and Jammeh not leave. Senegalese troops withdrew Wednesday from the border with Gambia, while Nigerian military equipment to Senegal conveyed to the case should be taken action.