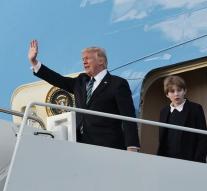 washington - Barron Trump will be in a school near his father from the next school year. The youngest son of the American president is enrolled at St. Andrew's Episcopal School, a private school at a half-mile north of Washington.

Barron moves this summer with his mother Melania to the American capital. It was already known that the First Lady and her son at some point would leave their current home, at the top of Trump Tower in New York.

Melania announced the news: 'We are particularly pleased that our son will go to St. Andrew's Episcopal School. The school is renowned for the diversity of students and the dedication to academic excellence. 'The school fee amounts to 36,000 euros per year.

It was actually meant that the news would not come out during the summer, the Washington Post writes. The fear was that the announcement would lead to demonstrations during the school year. However, parents of other students received a letter from the school principal earlier this week, so the White House could not be left behind.