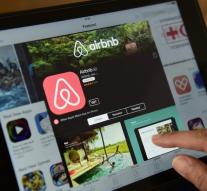 barcelona - The Spanish city of Barcelona has appointed one hundred additional home auditors. They must investigate and, if necessary, investigate the illegal rental of homes to tourists through sites such as Airbnb.

An estimated 75,000 to 100,000 of the total 1.7 million Barcelonese people rent their home, apartment or room via internet to tourists. They deserve a good sandwich here, but the backside of the medal is that it is virtually impossible for the average resident to find affordable living space in the city. Also, many people complain about the inconvenience caused by the uninterrupted flow of tourists in the city.

The city already has a licensing system for short-term rental of living space. Homeowners may only rent a living space to tourists with this paper. According to an estimate of the municipality, between 5,000 and 6,000 properties in the city are illegally rented.

Until recently, the check was done by ten officials. In the meanwhile 70 people have joined, and 110 checkers have to work at the end of the year. Airbnb has committed its commitment and promised to refuse illegal providers of its site.

Last year, hotels and apartments received 18 million visitors, while another 12 million tourists made a day trip to the city.