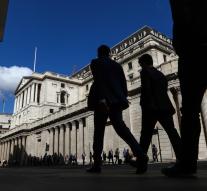 That's what Reuters reports Monday after a 13-day round trip. The first wave of relocations of financial staff would therefore comprise 2% of the total number of employees in this sector.

Banks like Goldman Sachs, UBS and Citigroup have been in talks with regulators for months.

The departure of the bankers is relatively small, but the loss of tax revenues from the larger taxpayers would cut into the British treasury.

That will be done by the rest of the taxpayers, according to the Institute for Fiscal Studies.