Home / World / Bangladesh: Myanmar has to take back Rohingya 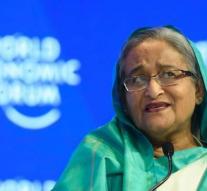 cox's bazar - The prime minister of Bangladesh wants that neighbor Myanmar calls safe areas so that Rohingya refugees can return. 'Myanmar has created this problem and they need to fix it,' Sheikh Hasina said. 'Myanmar will have to return to all Rohingya refugees who have come to Bangladesh.'

Bangladesh is heavily buried under the mass influx of Rohingya Muslims who flee for violence in their homeland. The parliament adopted a law on Monday calling on the international community to exert pressure on Myanmar to resolve the crisis.

The Myanmar authorities have indicated that refugees may return if they can prove to be citizens. Many Rohingya, however, are stateless because they are seen by the authorities as illegal immigrants from Bangladesh. In practice, many Rohingya families lived for generations in Myanmar.