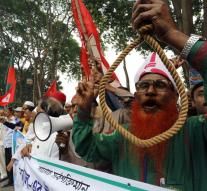 dhaka - Bangladesh Sunday (local time) two opposition leaders executed for war crimes they allegedly committed in 1971. These are crimes during the war that Bangladesh seceded from Pakistan.