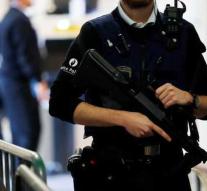 Antwerp Agents in Belgium are no longer allowed to wear visible tattoos. The Minister of Internal Affairs Jambon is going to tighten up the guidelines.

] 'Agents must be neutral and emit uniformity'. The trade unions are not enthusiastic about the strict measure, according to Het Nieuwsblad.

Tattoos must be 'avoided' in the neck, forearms and hands.

'An empty forearm is preferred,' says Jambons spokesman Olivier Van Raemdonck. 'Suppose now that an agent has the RSC Anderlecht logo on the forearm. And he is sent to the Club Brugge stadium for an order service. This can give problems between topped supporters. '

Van Raemdonck does not want to anticipate what needs to be done with agents who are already employed and have visible tattoos. 'We still have to discuss a few things with the trade unions. '

Het Nieuwsblad has heard that agents with tattoos on the forearms will have to cover them or have them welded away.

The trade union believes that compulsory removal is 'unacceptable'. 'Agents must be selected on the basis of what they can and know. Not on the basis of their appearance '.