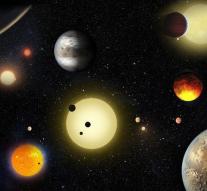 berkeley - A striking ballet around the star Kepler-223. He has four planets rotate synchronously. In the time it takes for the inner planet for eight rounds, the second planet makes six rounds, the third and the four outer three.

American scientists have discovered the rotating pattern. They write about it in the major science journal Nature. Such patterns are not uncommon, there is a name for it: orbital resonance. Pluto takes eg twice around the Sun, while Neptune at the same time takes three laps. Jupiter and Saturn there is a connection. But with four planets such a link is exceptional.

The pattern may say something about the history of the system. It seems that the four planets form farther from their stars. After some time, they were pulled little by little to the inside. With their gravity now they hold each other in the same rhythm.

There is a theory that the orbits of Jupiter, Saturn, Neptune and Uranus also were once linked. That link would be disrupted.,, Such resonance is extremely vulnerable. As objects fly around and hit each other, they would push the planet out of the pattern, '' the researchers said.