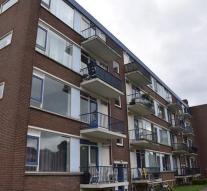 nijmegen - Some residents of the Aubadestraat in Nijmegen are no longer allowed to access their balcony. The reason: there would be a risk of collapse. This is stated in a letter received by the residents of real estate management Hestia.

Inspection of the balconies would have shown that they did not meet the architectural requirements. They would be dangerous.

The balconies will be provisorically launched in the short term. Then they can be used again. Later, a structural reconstruction follows.