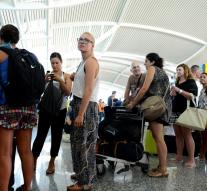 jakarta - The airport of the Indonesian Bali deletes almost seven hundred flights because of the eruption of Mount Rinjani on the neighboring island of Lombok. The ash that the volcano spits out, makes flying impossible. Denpasar airport is one of the busiest in Indonesia.

The airport will remain at least until Thursday morning close. Then the situation will be reviewed, said a spokesman for the airport. The volcano came to life last weekend. Tens of thousands of tourists stranded by the block at the airport.