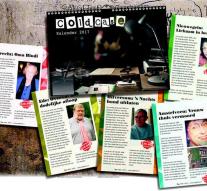 amsterdam - The 'bajeskalender' with cold case business is a success. Since the calendar early this year, testimony was spread among detainees in five prisons, reopened two cases.

That was announced by the police yesterday in the penitentiary facility Alphen aan den Rijn, where staff were informed about further rolling out of the project into twenty other prisons. In two of the 52 unresolved issues on the calendar there is reason for new research. Which they are, the police do not want to say.

In the past six months, 160 tips have been received on coldcases. There are twice as much as normal during that period. According to the police, it is difficult to find out if they have actually entered prisons, but it is striking.