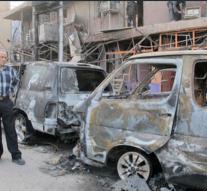 baghdad - At least ten people Monday to life come in an attack in Baghdad. Also touched according to police and medical sources at least 35 people injured when a car bomb exploded in a busy square in the Iraqi capital. The responsibility is still unclaimed.

Baghdad was Saturday already rocked by three attacks which certainly 29 people were killed. Terror group Islamic State undertakes regular attacks on civilian targets in Iraq, where it is engaged in a fierce battle with government forces and their allies.