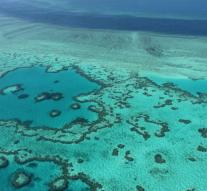 - The Australian state of Queensland has put an end to the dumping of industrial dredging in the waters around the famous coral reefs of the Great Barrier Reef. The parliament of the state passed a law that prohibits to. Nature organizations are particularly pleased.

" For anyone who is worried about the reefs is enjoying this ", for example, said Dermot O'Gorman, the boss of the World Wildlife Fund (WWF) in Australia.

The dumping of large amounts of contaminated sediment in the ocean northeast of Australia has for decades the most normal thing in the world and a thorn in the side of environmentalists. According to estimates by WWF prevents the new law in the coming years, roughly 4.6 million truckloads of mud disappears into the sea.