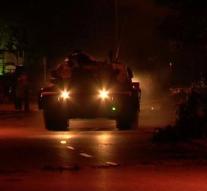 ankara - At the building of the Turkish parliament in Ankara Friday again heard two explosions. The explosion took place after the Turkish government announced that the,, situation was largely under control '. Members of the Turkish Parliament lurk in the parliament building, reported one of the representatives by phone.

The station NTV reported that by troops loyal to the government thirteen soldiers were arrested who wanted to storm the presidential palace in Ankara on behalf of the coup plotters.

Taksim Square were thirty soldiers, who supported the coup in the center of Istanbul, surrendered to the police. That happened after aircraft of the Turkish Air Force had flown low over the square and the sound barrier breakthroughs.