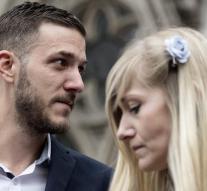 london - The sick British baby Charlie Gard is transferred to a hospice to spend the last few hours before the respiration is disconnected. That ruled the London judge on Thursday, reported Sky News.

The parents of the terminal sick Charlie agreed on Wednesday that their son went to a hospice, but would like to spend a few days with him before he dies. They gave a legal battle to make him die at home.