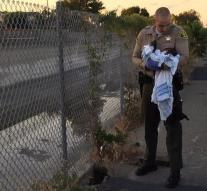 compton - A girl of less than two days old in Compton, Los Angeles found under rubble waste that was dumped in a hole in the road. A pedestrian heard howling out of the hole, which the police became involved.

The baby was wrapped in a blanket and lay hidden under the rubble, reports Sky News. Rescuers treated the child on the ground, after which she was transferred in stable condition at the hospital.

The mother is no trace.