Home / World / Baby born into chaos by bombing in Nice 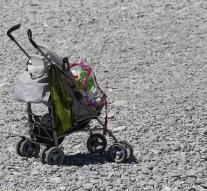 - Despite all the misery that arises after the attack in Nice, there is some good news. After a lost baby earlier in the day returned to the arms of his parents, there is a baby born while the chaos in the southern French city erupted.

The French newspaper Le Figaro reports that a pregnant woman gave birth spontaneously in Ruhl Plage restaurant on the beach of Nice. A group of hundreds of people was looking for a place where they could flee there during the attack. The pregnant woman was in this group, a total of 1500 men who saved the net to get temporary shelter at the beach restaurant. By the situation she was in labor began spontaneously. The birth had to be established on site under harsh conditions.

The great happiness for women was that a doctor was present at the restaurant. It was all chaos another hour before emergency services were able to help the woman and the doctor. However, the owner of Ruhl Plage is troubled by birth.